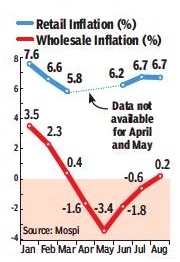 Retail inflation remained above the central bank’s comfort level for the fifth consecutive month in August, and held near the previous month’s level as prices of some food items remained stubborn, prompting economists to rule out any interest rate cut for now.

Retail inflation, as measured by the consumer price index, rose an annual 6.7%, nearly the same level recorded in the previous month. Inflation for the food and beverages segments was at 8.3% in August, marginally lower than the 8.5% in the previous month. Double digit inflation in meat and fish (16.5%), eggs (10.1%), milk and milk products (12.5%), vegetables (11.4%), pulses and products 14.4% and spices (12.3%) sustained the pressure on the overall numbers. The RBI had flagged the building of inflationary pressure and had pressed the pause button in its interest-rate-cutting cycle.

The data showed inflation in the fuel segment shot up to a 5-month high of 3.1% in August compared with 2.7% in July.

Inflation in urban areas was at 6.8% in August, higher than the rate in rural areas, which stood at 6.7%.

Separate data showed inflation, as measured by the wholesale price index, rose an annual 0.2% in August, moving into positive territory after four months of contraction. The gap between the two indices has also narrowed.