India may’ve had 65L Covid cases by May: Sero survey 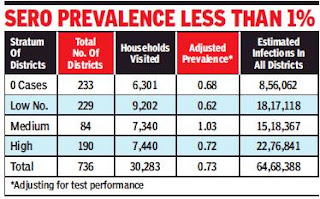 A total of 64,68,388 adult Covid infections were estimated in India by early May, even though the adjusted all-India seroprevalence was a low 0.73%, according to the results of a serological survey conducted by the ICMR released on Friday.

While the survey indicated that less than 1% of the adult population was exposed to coronavirus by mid-May, the official tally at the time was even lower at only 85,940 cases detected till May 15. This would indicate most cases may have been missed during the first few months of the outbreak.

This could be because the testing strategy was tailored by limited test kits and lab capacity and also because cases may have been asymptomatic.

A sero survey estimates the percentage of population exposed to a virus by finding the presence of antibodies. Antibodies indicate that a person had been infected but is no longer so.

Though the ICMR had shared some findings of the study in June, the final study was published in the ‘Indian Journal of Medical Research’ on Friday. A total of 30,283 households were visited and 28,000 individuals enrolled for the sero survey across the country. In June, too, ICMR had estimated prevalence of infection at 0.7%. It had said risk of the spread was 1.09 times higher in urban areas. While in urban slums, it was 1.89 times higher than rural areas.