Which state has a higher literacy rate: Andhra Pradesh or Bihar, Telangana or Assam, Karnataka or Uttarakhand? If you picked the southern state each time, you were wrong and by a considerable margin.

Data from a 2017-18 National Statistical Office report on education reveals these counter-intuitive truths and shows that, at least when it comes to literacy, notions of “developed states” can be misleading.

Typically, states with relatively low literacy rates also tend to have the highest gender skews, but that is not always true. Andhra Pradesh, for instance, has a gap between male and female literacy rates of only 13.9 percentage points, while Rajasthan (23.2), Bihar (19.2) and UP (18.4) have pronounced gaps despite better overall literacy rates.

Combined effect of gender and urban-rural skews means the difference between urban male literacy and rural female literacy is an alarming 27.2 percentage points at national level. In individual states it can be much worse. 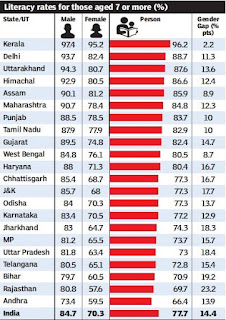