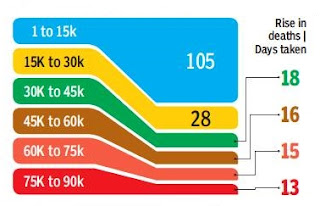 India’s Covid-19 fatalities crossed the 90,000-mark, the last 15,000 deaths coming in just 13 days, even as the number of fresh cases in September so far went past the two-million mark, much more than over 1.9 million cases which were recorded in the entire month of August.

With 86,825 new infections on Wednesday, India’s Covid-19 count in September reached 20,44,570, which is the highest recorded in a month by any country in the world. The country surpassed its own record of 19,87,705 cases, which it had added to the Covid-19 caseload in August.

The breaching of the two million mark in September came even as the number of fresh cases remained below 90,000 for the fourth consecutive day on Wednesday. The low daily count comes in the wake of reduced testing across the country in the last few days. Barring on September 19, when a little over 1.2 million tests were conducted in the country, daily testing has remained below the one-million mark since September 18, as per the figures provided by covid19india.org. On Tuesday, a total of 9,53,683 tests were conducted, nearly 20,000 more than the previous day.

Tamil Nadu, the second worst affected state after Maharashtra in fatalities, crossed the 9,000-mark by adding 63 deaths, taking the state’s toll to 9,010.

Two days after reporting a dip in daily cases and deaths, Maharashtra was back to adding over 20,000 cases on Wednesday and also reported a significant jump in fatalities. As many as 21,029 fresh cases and 479 deaths were recorded against 18,390 infections and 392 fatalities on Tuesday.

West Bengal’s cumulative toll went past the 4,500-mark after registering 61 fresh deaths. In a worrying sign, Kerala went pass the 5,000-mark for the first time by registering 5,376 infections. Apart from Kerala, Rajasthan and Arunachal Pradesh were the only states which registered their highest daily cases with 1946 and 249 infections, respectively.