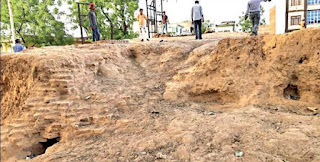 For years, the remains lay unnoticed in the midst of the bustling city of Meerut. At first glance, there was nothing distinctive about it — so much so that a part of it was destroyed when a power house came up over it. Now, after the Meerut circle of the Archaeological Survey of India was created just last year, the remains have been identified as those of a Mauryan-period brick platform going back over 2,000 years. And it could hold the key to a “lost” Ashoka Pillar site from the 3rd century BCE.

“A large part of the structure is in the form of a 30m by 35m platform at Vikas Puri . The ancient site is undoubtedly one from the Mauryan period because the bricks are typical of the era,” Meerut circle superintending archaeologist Brajsundar Gadnayak said. The dimensions of the bricks are unique to the Mauryan period — 42cm x 26cm x 8cm. “We have also found pottery and ceramics belonging to those times,” Gadnayak added. An ancient canal route here that, most likely, connects to the Kali river has also been found.

The finding has rekindled hopes that it could lead historians to a pillar installed in Meerut around 3rd century BCE by Ashoka, the third emperor of the Mauryan dynasty. Historian Dr KK Sharma said, “The Gazetteer (of 1904) mentions the reinstallation of Meerut’s pillar at the Delhi Ridge but we have not been able to find the original site here.”

The Meerut Gazetteer he referred to said, “The earliest historical connection which can be made with the (Meerut) district is the erection of an Asoka pillar near Meerut … On the ridge at Dehli (Delhi) now stands a pillar which, according to Shams-i-Siraj, was removed from near the town of Meerut and set up in the Kushak Shikar or hunting palace. The site occupied by the pillar has not been identified.”