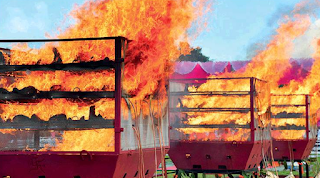 On World Rhino Day, Assam set on fire a large stockpile of over 2,400 rhino horns — which were extracted from naturally or accidentally dead rhinos as well as those confiscated from arrested poachers and stored for over four decades in government treasuries — to stop their illegal trade.

Chief minister Himanta Biswa Sarma, who personally supervised the event at Bokakhat, about 23km from the Kaziranga National Park, amid the chanting of Vedic mantras and blowing of conches, said they wanted to prove that the common belief that rhino horns have miraculous medicinal properties is a myth.

The horns, extracted by poachers after killing the animals, have a huge illegal market in several countries, especially Vietnam, where they are prized for their aphrodisiac qualities and command a high price.

Sarma said: “The horns have been destroyed to send a strong message against poaching and smuggling of rhino horns. We want to tell the world that the rhino alive with the horn on its head is precious to us and not a dead animal with its pride removed by poachers or those kept in government treasuries.”

Acting on a cabinet decision, 2,479 horns were consigned to flames.

“The destruction of the horns in a state with 71% of the world’s population of the one-horned rhino will send a strong message to poachers that the horn has no medicinal value and its trade is completely illegal and based on myths. The horn is used in traditional Chinese medicine. A persistent demand for rhino horns in some countries acts as an incentive for poachers,” said state principal chief conservator of forests (wildlife) Amit Sahai.