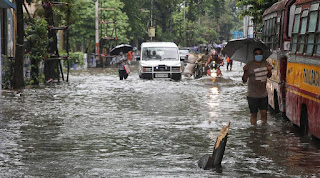 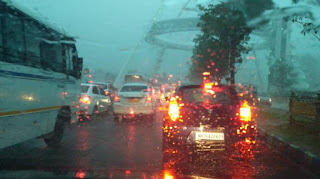 An unexpected movement of a cyclonic circulation from northwest Bay of Bengal and the adjoining areas of the Bengal-Bangladesh coast towards Kolkata and south Bengal triggered an incessant deluge early Monday that lasted more than eight hours, leaving most areas of the city and its surrounding districts waterlogged and paralyzing life across south Bengal, even as the Met office predicted the rain to continue till Tuesday.

With the city recording 142mm rain on Monday, it turned out to be the rainiest September day in Kolkata since September 25, 2007, when the city received 174.4mm rain.

The circulation that had resulted from the merger of two such systems — one over south Bangladesh and another over northwest Bay — gained strength and moved into south Bengal around Sunday midnight. It then started moving towards Kolkata and stood right over the city at around 3am that launched an intense spell of rain which continued till Monday noon.

It was aided by the monsoon trough, that, too, passed through the city and added to the rain intensity. Several areas experienced traffic snarls and power cuts as CESC switched off supply when the water level breached the danger mark. The high tide in the Hooghly river further complicated the situation.

At least 19 flights were delayed for anything between 45 minutes and 4.5 hours and several others were delayed by 15 to 30 minutes at the Kolkata airport owing to heavy rainfall.