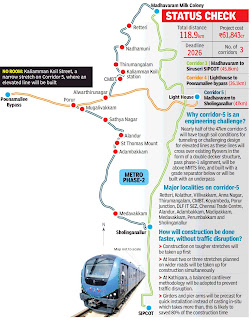 In about six years, when the metro rail line from Madhavaram to Sholinganallur opens, trains will criss-cross the city from a depth of 21 metres in Villivakkam to 38 metres above the road at Kathipara in a virtual roller coaster ride. But building the corridor will put the skills of engineers to test. From tunnelling through tough soil, to laying elevated lines crossing busy flyovers and MRTS lines, nearly half of the 47km corridor-5 will pose a stiff challenge.

At least nine locations, say officials, have been identified as being difficult for construction in terms of planned design and management of traffic.

“The most challenging will be Kathipara where we will be crossing above the phase-1 alignment,” a Chennai Metro Rail Ltd official said. “It requires a well thought-out design as there are many existing structures and it is a challenge to identify their foundation. We must also bypass all underground utilities including huge pipelines. We cannot disrupt the traffic below. So, there are very few spots in that location which we can use for construction,” he said.

The hard rock soil along the 5km between Retteri and Nadhamuni is considered tough for tunnelling, while at Thirumangalam, Koyambedu, CMBT and Medavakkam, elevated lines will rise above existing flyovers. “Stations in Medavakkam have been planned above the existing flyover. But we are redesigning them now,” he said. “After CMBT, we will face one of the narrowest roads where Kaliamman Koil Street merges with Arcot Road. We have acquired huge amounts of land and will demolish buildings.”

Between Alwarthirunagar and Porur, elevated lines will be on two levels (double decker) for 5.6km with five interchange stations linking corridors 4 and 5. A grade separator is planned between Mugalivakkam and MIOT Hospital above which an elevated line will be built, while an underpass will come up at Vanuvampet. At Adambakkam, the metro line will be above the MRTS track.

Construction contracts have either been awarded for some stretches or the tender process is in the final stages, with almost all having a deadline of around three years.

To complete the project on time, construction for stretches identified as tough across the entire phase will be taken up first. Lines planned on wider roads will also begin in at least 2-3 locations simultaneously. Different types of girders and construction methodology will be adopted according to the span of the distance between two support structures.

Three layers of protection will be installed to ensure nothing falls on the road during construction.

“We cannot ensure zero inconvenience for people, but it will be minimised by thoughtful process by using minimum road width and minimum time duration for construction,” the official said.