Pakistan: An arsonist in fire-fighter’s guise 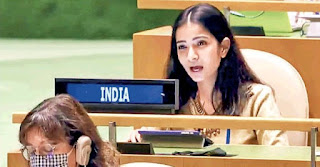 India’s diplomat Sneha Dubey delivered a fiery rebuttal to Pakistan Prime Minister Imran Khan raking up the J&K issue in his UNGA address, saying Pakistan has nurtured terrorists for long and is an “arsonist disguising itself as a fire-fighter”.

Khan’s comments seeking to paint his country as a victim of terrorism, saw young Indian diplomat and first secretary Sneha Dubey responding, “Our region, and in fact the entire world, has suffered because of their policies. On the other hand, they are trying to cover up sectarian violence in their country as acts of terror.” Dubey, an IFS officer of 2012 batch, was exercising India’s right of reply, and added that Pakistan held the record of hosting the largest number of terrorists proscribed by the UN Security Council.

In his nearly 25-minute virtual address, Khan had spoken about the August 5, 2019, decision of the Indian government to revoke the special status of the erstwhile J&K state and also the death of pro-Pakistan separatist leader Syed Ali Shah Geelani.

Dubey said it was regrettable that this was not the first time that the leader of Pakistan had misused platforms provided by the UN to propagate false and malicious propaganda against India, and sought in vain to divert the world’s attention from “the sad state of his country where terrorists enjoy free pass while the lives of ordinary people, especially those belonging to the minority communities, are turned upside down”. In the past too, junior Indian diplomats, usually women, have countered such statements by Pakistan.

“We exercise our right of reply to one more attempt by the leader of Pakistan to tarnish the image of this august forum by bringing in matters internal to my country, and going so far as to spew falsehoods on the world stage,” said Dubey, the third Indian woman diplomat at the UN to rebut Pakistan’s claims on J&K. Another blistering response was delivered by 2005-batch IFS officer Eenam Gambhir in 2016. This was followed by a similar right of reply by Vidisha Mishra in 2019. A post-graduate from JNU, Dubey was schooled in Goa and later graduated from a college in Pune.

“While such statements deserve our collective contempt and sympathy for the mindset of the person who utters falsehood repeatedly, I am taking the floor to set the record straight,” she said. Dubey strongly reiterated that the entire Union Territories of Jammu & Kashmir and Ladakh “were, are and will always be an integral and inalienable part of India’’.