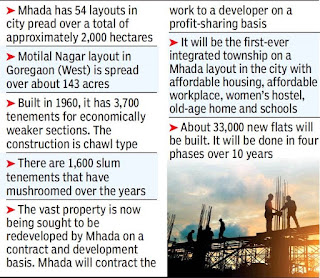 The first-ever integrated township in the city will be built on a143-acre Mhada layout, the path for which was cleared by the state cabinet when it approved the Rs 20,000 crore redevelopment plan for Motilal Nagar in Goregaon (west) on Wednesday Housing minister Jitendra Awhad said 33,000 flats will be constructed, adding the redevelopment will be carried out in four phases over 10 years. It will serve as a model for the redevelopment of other Mhada layouts in Mumbai.

Motilal Nagar, the largest layout in the city, was built in 1960 for the economically weaker sections. It has 3,700 tenements, which are ground plus-one structures, and is also home to 1,600 slumdwellers.

Mhada has large layouts in various parts of the city. Many have seen neglect at the hands of Mhada and the government, resulting in largescale encroachments on its open spaces. by residents and political parties.The cabinet approval for the Motilal Nagar plan was needed as the government has now taken over the powers from Mhada to approve all redevelopment in its layouts.

Several redevelopment projects have been languishing for years and residents whose homes were demolished have been living elsewhere without getting rent. While the government received several complaints about it, it could not intervene as there is no tripartite agreement with Mhada. The state housing department recently issued a government resolution that it will be the final authority for issuance of letter of intent for any redevelopment so as to keep a check on matters and ensure speedy redevelopment.