Akash Prime takes to the skies 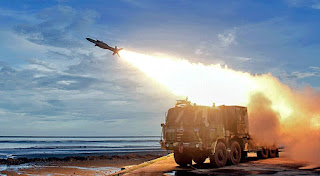 A new version of the Akash missile – ‘Akash Prime’ – was successfully flight-tested on Monday from the integrated test range at Chandipur in Odisha. The missile intercepted and destroyed an unmanned aerial target mimicking an enemy aircraft in its maiden flight test. Defence minister Rajnath Singh and DRDO chairman G Satheesh Reddy congratulated the team involved in the successful trial