In a first, IAF lands a Hercules on highway in emergency drill 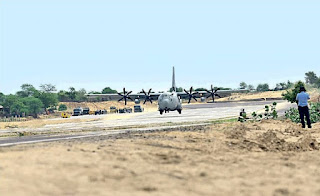 As a Hercules C-130J aircraft of the Indian Air Force touched down on a 3km stretch on NH 925 near Barmer in a mock emergency landing on Thursday, the country’s first Emergency Landing Facility on a national highway had a flying start. With three Union ministers on board, the mission also paved the way for 19 more ELFs that will come up on highways across the country.

Chief of defence staff General Bipin Rawat, Air Chief Marshal RKS Bhadauria and other officials were present at the inauguration.

“While this is the first-ofits-kind runway in the country, we are working on 19 similar projects. Of these, two more will be in Rajasthan,” said Gadkari.

“By creating a strip so close to the international border, we have sent a message that we will stand up for unity, diversity and sovereignty of our country at any cost,” said Rajnath Singh.