Vacceleration: 75cr shots given in India 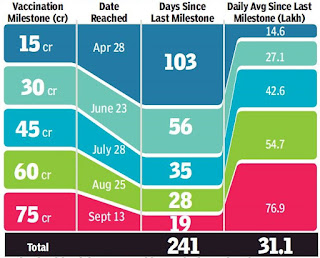 India accomplished a major milestone in Covid vaccination of the population on Monday, with over 75 crore doses administered across the country so far.

With improved supplies, the pace of vaccination has increased, particularly since the last week of August. Daily average vaccinations have improved to over 74 lakh doses in September, as against 59 lakh in August. India has also administered more than one crore doses in a single day thrice since August 27. On Monday, 75.6 lakh doses were given till 10pm.

The highest single-day record so far is of administering 1.41 crore doses on August 31.

“Congratulations India! In the 75th year of Independence, the country has crossed the figure of 75 crore vaccinations,” Health Minister Mansukh Mandaviya tweeted.

“WHO congratulates India for scaling up Covid-19 vaccination at an unprecedented pace. While it took 85 days to administer first 100 million doses, India reached 750 million doses from 650 million in just 13 days,” Dr Poonam Khetrapal Singh, regional director, WHO South-East Asia, said in a statement.So far, the entire adult population in six states and Union territories — Sikkim, Himachal Pradesh, Goa, Dadra and Nagar Haveli, Ladakh and Lakshadweep — has received at least one dose of the vaccine.