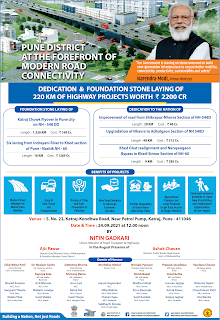 Union road transport and highways minister Nitin Gadkari said the Centre’s infrastructure committee would soon approve a proposal to sanction 13 acres of defence land for the expansion of the city airport.

Gadkari, speaking on the sidelines of an event in the city, said the committee — which he chairs — was likely to approve the proposal in its next meeting. “The Air Force requires some land in Chandigarh. We told the airport authorities to submit a proposal suggesting that land in Chandigarh be handed over to the IAF in exchange for land in Pune. The proposal has been sanctioned and will come before the infrastructure committee. I will see it gets through,” Gadkari said after breaking ground for a flyover project on Sinhagad Road.

Gadkari expressed his satisfaction with the pace of work on the city’s three vital projects — Metro, airport and Mula-Mutha pollution reduction. Further, Gadkari said toll has been abolished on the Pune-Satara Road. “The stretch had become problematic as many accidents were occurring. We have terminated the toll on this route. The pending work on this road is likely to finish by December, February at the latest. We will allot Rs 50 crore,” he said.

Gadkari also said that a safety audit of the road will be carried out with the help of an expert agency.

He said a multi-layered road network, with a provision for Metro service, could be developed on the Talegaon-Shikrapur-Shirur-Ahmednagar-Wagholi road circuit at a cost of Rs.50,000 crore. The Union government can develop the project if the state government waives GST and provides concession in royalty over use of sand and other material, Gadkari said.

Gadkari also said his ministry was ready to develop the proposed ring road around the city if the state government acquires and hands over land.

Gadkari said his ministry has undertaken ring road projects in Hyderabad and Bengaluru and if the Maharashtra government agrees, the Pune Ring Road project too can be taken over. “If the state government acquires the required land and hands it over to us, we will construct the Pune Ring Road. It’s an important project for the city. The rates of land along the proposed projects are very high and if Dada (Pawar) takes personal interest he can resolve the issues being faced by the project in land acquisition,” said Gadkari.

He further said that his ministry was working on a new expressway between Pune and Bengaluru, via Phaltan-Satara-outer Belgaum, at an estimated cost of Rs.40,000 crore. Try to develop a new Pune on this road to reduce the congestion in Pune.

“About 70% of the work on the Delhi-Mumbai expressway is complete, but the work on three packages in Maharashtra is left,” Gadkari said.