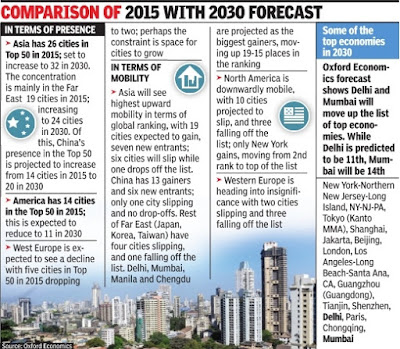 Delhi has knocked out Mumbai as the economic capital of India, taking the 30th spot among the top 50 metropolitan economic entities globally in 2015, as per the latest data put out by Oxford Economics. Mumbai is ranked 31st in the list.
Oxford Economics said the Delhi Extended Urban Agglomeration (EUA) consisting of Delhi, Gurgaon, Faridabad, Noida and Ghaziabad had a GDP of $370 billion, in terms of purchasing power parity .By comparison, the GDP of Mumbai EUA (Mumbai, Navi Mumbai, Thane, Vasai-Virar, Bhiwandi and Panvel) was pegged at $368 billion.
What's more, Oxford Economics said Mumbai is unlikely to edge out Delhi as India's economic capital in the foreseeable future. The global advisory firm's forecast for 2030 shows both cities moving up the list of top metropolitan economies, with Delhi predicted to be at 11th spot and Mumbai holding the 14th position.
However, Mumbai EUA with a lower population still scores over Delhi EUA in per capita terms. An analysis of Oxford Economics figures puts Mumbai per capita GDP (PPP) at $16,881 while it's $15,745 for Delhi.
Oxford Economics' definition of Mumbai EUA makes it roughly but not exactly correspond to the Mumbai Metropolitan Region (MMR), while the Delhi EUA is much smaller than the National Capital Region.
Maharashtra Chief minister Devendra Fadnavis rejected the notion that Delhi's GDP had gone ahead of Mumbai.