Theresa May in India 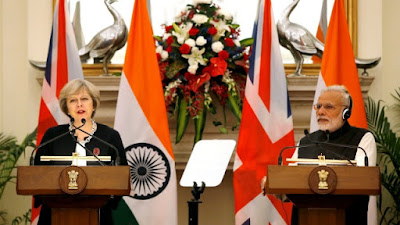 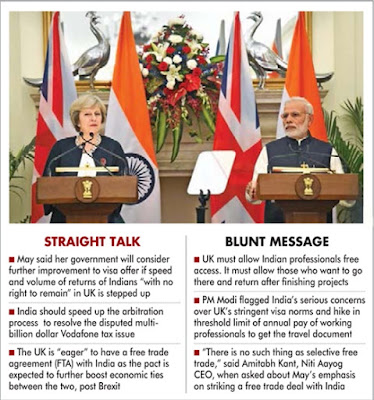 British Prime Minister Theresa May signalled her intent to focus on business with India, promising easier visas for businessmen and a possible free trade agreement (FTA), besides pledging support in raising a £500 million fund to finance infrastructure projects. Overall, business deals worth around £1 billion (around Rs.83,000 crore) are to be signed during the trip, including funds for startups.
The announcements came during May's maiden visit to the country and amid concerns by the government over the visa regime in the UK. During his meeting with May , Prime Minister Narendra Modi flagged the stringent visa norms for students and an in threshold of annual pay for working professionals to get the travel document as areas of concerns.
While May promised to ease rules for businessmen, there was reluctance on providing a similar dispensation for students.The number of student visas issued to Indian nationals fell from 68,238 in 2010 to 11,864 this year, official UK figures showed.
But the UK is keen to improve its business relations, especially at a time when it is exiting the European Union and has been talking to India for a possible free trade agreement.
“Yes, they are eager to have an FTA. They certainly look at India as one of the potential FTA partners. We are also happy to engage with them,“ minister for commerce and industries, Nirmala Sitharaman, told reporters here. But formal negotiations on a trade agreement cannot start before the exit from EU. Sitharaman said India was conscious of the fact that after triggering Article 50, the UK needs 24 full months before it actually exits EU. Triggering of this article will formally begin the process of exit.
India and the UK signed two MoUs on increasing cooperation in intellectual property rights and ease of doing business.