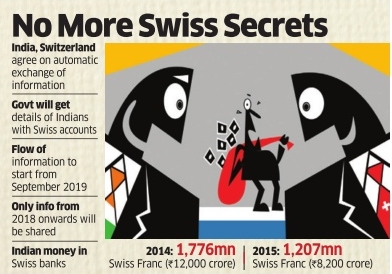 India and Switzerland have signed an agreement for automatic exchange of information, marking another step in addressing the menace of black money stashed abroad. New Delhi, after September 2019, will be able to access transactions done by Indians in Swiss banks from 2018 onwards, allowing the government to know the identities of those hiding wealth in Switzerland. The information will be available for 2018 and subsequent years on an automatic basis. However, details of Swiss accounts held by Indians prior to 2018 will not be shared.
At the end of 2015, over Rs.8,000 crore of Indian money was parked in Swiss banks, down from over Rs.12,300 crore a year ago.
In a statement, finance ministry said it would now be possible for India to receive, September 2019 onwards, financial information of accounts held by Indian residents in Switzerland for 2018 and subsequent years on an automatic basis.
India has already enacted a tough foreign black money law that can penalise any undeclared foreign asset with imprisonment of up to 10 years and effective confiscation of the asset. It had offered a one-time chance to people to come clean under which Rs.4,147 crore was declared.
The India-Switzerland `Joint Declaration' signed here says that both the countries would start collecting data in accordance with global standards in 2018 and exchange it from 2019. India has promised to keep the data confidential.
Swiss Federal Department of Finance said the signing of the declaration with India confirmed Switzerland's international commitment to implementing the automatic exchange of Information (AEOI) standard.
Swiss banks have been synonymous with black money in India with their secrecy laws making it difficult to get information on any Indian money parked there. Switzerland has relented on the secrecy laws following a global campaign against illicit funds and tax havens.
The agreement does not talk about exchange of information based on stolen data or pending requests from India. India has a list of 628 names that had accounts in HSBC's Geneva branch. The list was provided to India in 2011 by the French government. Estimates of Indian money in Swiss banks is based on the estimates of their liability to Indian nationals. Not all the Indian money in Swiss banks is illegal as the RBI allows Indians to have foreign accounts.