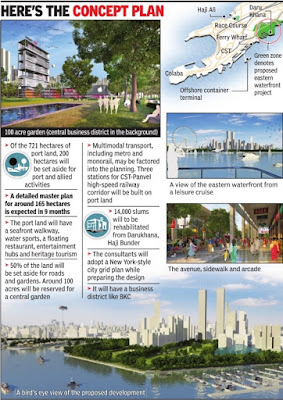 A consortium, which includes a firm that designed the Sabarmati riverfront, will prepare the master plan for revamp of the eastern waterfront into a hub of tourism, recreation and entertainment under a self-financing model, to be executed via commercial exploitation of land. The consortium comprises Ahmedabad-based HPC Design, Unity Consultancy and PricewaterhouseCoopers.
With this development, the eastern waterfront project has officially kicked off. It was the consortium's concept plan that helped it bag the project. The consortium's appointment was cleared by the board of trustees of the Mumbai Port Trust (MBPT), which is vying to become the special planning authority for the project.
MBPT chairman Sanjay Bhatia said, “The consultants will start work on the draft master plan for 550 hectares within six months. While 300 hectares of this area is available, a detailed master plan for 165 hectares will be ready in nine months.“He further said that tenders will be floated thereafter to select construction firms for executing the plan.
The Union shipping ministry had appointed former MBPT chairperson Rani Jadhav to prepare a report for the revamp. Bhatia said, “Consultants will pick some suggestions made in the report to prepare the master plan. Thereafter, the plan will be sent to the BMC for its approval.“
MPBT wants the consultants to a create a landmark site with plazas, shopping arcades and a pedestrian and a bicycle friendly environment.
Bhatia said, “The entire revamp will be carried out on land where non-port activities are undertaken--that is, north of the Ferry Wharf.“ He added, “Since it is being carried out under the self-financing model, we will have monetize the land so that another central business district can come up on the lines of the Bandra-Kurla Complex.“
Smart technology would be used for operation and maintenance of infrastructure and allied facilities, environment-friendly initiatives such as zero discharge, recycling of waste, energy-efficient technology and world-class transport and logistical facilities.
Besides revamp of the port land, MBPT has come up with a Rs.150 crore plan for a cruise terminal with retail, restaurants and entertainment facilities.
It will also soon firm up plans for makeover of one of the city's oldest landmarks--Sassoon Dock in Colaba. MBPT plans to open up its space here for eateries that can turn this neighbourhood into a recreation zone.