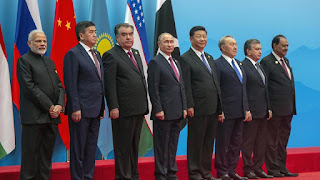 The eight-member Shanghai Cooperation Organisation signed 22 documents including separate pacts on countering terror and deradicalisation, even as India kept itself out of reference on the China-led Belt and Road Initiative in the summit joint communique.

Besides the joint communique, a dozen other documents were signed between the member countries including one on trade facilitation in an era of protectionism at the summit in the Chinese city of Qingdao. Four other documents were signed among various ministries of member countries, including one on micro, small and medium enterprises and another on tourism. One of the key documents has been on an appeal to youth against radicalisation. India played a key role in shaping documents on counter-terror and deradicalisation of youth.

The summit ratified a five-year action plan for implementing the Treaty on Long-Term Good-Neighborliness, Friendship and Cooperation of the SCO Member States.

PM Modi in his intervention in the restricted format of the SCO summit urged for a regional front against terrorism and slammed attempts to “threaten” peace in Afghanistan. Modi rued the worsening situation in Afghanistan was “an unfortunate example” of terrorism and suggested that it was “our common responsibility to ensure that reasons that threaten Afghanistan’s sovereignty and security are not repeated”.

The Qingdao declaration called for implementing a three-year plan to combat terrorism, separatism and extremism. The member countries also signed a decision to approve the 2018-2023 Anti-Drug Strategy and Action Plan and implement it. The leaders also signed an information pact.