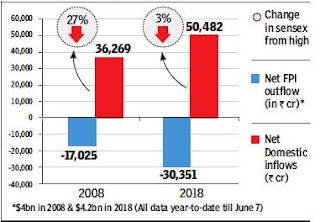 It could perhaps be a sign of maturity for the Indian markets. Despite one of the sharpest foreign fund outflows on record, the sensex and the Nifty — the two leading benchmarks — are still near their all-time high levels. Mid- and small-cap indices, however, are down substantially, but foreign funds mostly stay away from such stocks.

According to Kotak Mutual Fund MD Nilesh Shah, the fact that India managed bigger foreign outflows from debt and equity markets together so far in 2018 than at the time of the US subprime crisis in 2008 shows the maturity of the Indian economy over a decade.

Both 2016 and 2017 were also bad years to invest in real estate and gold. Earlier, real estate thrived in large part due to informal cash transactions. So, demonetisation dealt a hard blow to the sector, from which it took 16-18 months to recover.

This was reflected in strong inflows into mutual funds and insurance plans, through which a large number of retail investors entered the stock market.

There are, however, some who feel the heavy MF inflows are cyclical in nature and do not point to a structural shift, and hence the Indian market may not be as resilient as it is being thought to be. Emkay Global head of research Dhananjay Sinha said, “I wouldn’t say the Indian market has matured as investment in the markets as percentage of total household savings continues to remain low, at 3.5%. In comparison, the historic high level seen in the 1990s was at about 6%. While the contribution of MFs is significant, FPIs still hold a dominant position in the secondary market.”