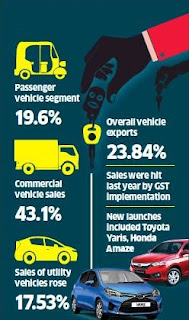 Vehicle sales continued to grow at a quick pace, with overall volume expanding 12.13% in May with new launches, higher infrastructure expenditure and a favourable base effect helping boost the performance.

While the passenger vehicle segment comprising cars, SUVs and vans grew 19.65% in the past month to 301,238 units, riding on new launches from Honda and Toyota, commercial vehicle sales increased at a faster pace of 43.06% to 76,478 units. These are wholesale numbers as manufactures usually declare only shipments to dealerships and not retail sales.

Last year, sales were hit by the implementation of new emission rules and uncertainty over the GST.

Manufacturers had offered heavy discounts on BS-III models in March 2017, before the adoption of the next emission standard of BS VI from April 1. This boosted March numbers, especially in commercial vehicles and two-wheelers, but killed the numbers the following months. Also, expecting that the rollout of GST from July 1, 2017 would lower car prices, consumers had postponed purchases, which hurt sales in May and June last year.

Sales of the newly-launched Toyota Yaris and Honda Amaze, besides strong numbers from market leader Maruti Suzuki, added to the spike in passenger car numbers. Exports of passenger cars, however, declined 1.69% to 44,904 units.

In the two-wheeler space, the industry saw a reverse in trend, with scooter sales declining after nearly 15 months by 1.40% to 555,467 units in May.

Overall, two-wheeler sales, however, rose 9.19% to 1,850,093, in an indication of a shift in consumer preference back to motorcycles.