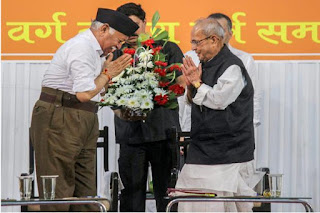 In his much-anticipated address to the RSS cadres in Nagpur, Pranab Mukherjee delivered a strong message about “hatred, intolerance and the need to uphold pluralism and dialogues” that perhaps can not only make the Sangh squirm, but also those who had criticised his decision to visit the Right-wing organisation’s headquarters, including his own partymen and daughter.

“In India, we derive our strength from tolerance, and respect our pluralism. We celebrate our diversity... Any attempt at defining our nationhood in terms of dogmas and identities of religion, region, hatred and intolerance will only lead to dilution of our national identity,” said the former President and Congress veteran, whose decision to attend the Nagpur programme was seen by his party and others as an endorsement of the RSS’s views.

“I am here to share my understanding on nation, nationalism and patriotism about our country which is Bharat,” said Mukherjee, 82, while addressing the RSS’s Tritiya Varsha Varg or Third-Year Graduate Course.

Mukherjee, who had served as the President of India between 2012 and 2017, reminded all about the universalism that India stands for. “Our nationhood is not one language, one religion or one common enemy, but it is perennial universalism of 1.3 billion, who use more than 122 languages, practise seven religions and belong to three major ethnic groups,” he said.

Speaking about his decision to participate in the RSS function, Mukherjee stressed on the dialogue process. “In democracy, it is important to have informed and reasoned public engagements on all issues of national importance. A dialogue is necessary, not only to balance the competing interests but also to reconcile them. We should argue, we may agree, or disagree but we cannot deny essential prevalence of multiplicity of opinion. Only through dialogue, can we develop understanding to solve complex problems of the nation.”

His remarks on how the Indian nation was an ancient idea and different from European nations perhaps came as music to the RSS’s ears.

He told the RSS cadres that since they were trained and disciplined like soldiers, they should try to make the national discourse free of both physical and verbal violence.

To ensure that Mukherjee had the last word at the programme, the RSS deviated from its over-70-year-old tradition of the outfit’s chief speaking after the chief guest and scheduled Mukherjee’s speech at the end.

Speaking ahead of Mukherjee, RSS chief Mohan Bhagwat said the debate over Mukherjee’s decision to attend the RSS event was “meaningless” and no one is an outsider for his organisation. Mukherjee will remain what he is and the Sangh will remain the Sangh even after the event, he added.

Bhagwat said his organisation wants to unify the entire society. “Even if there are differences of opinion, good people can bury it and come together in national interest. Differences are no obstacles for them,” he added.

The Tritiya Shiksha Varg is one of the most important milestones in the life of an RSS cadre.

Only the third-year graduates in the Sangh can become RSS pracharaks or full-timers. Prime Minister Narendra Modi is one such pracharak “loaned to the BJP”.