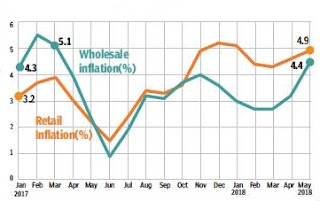 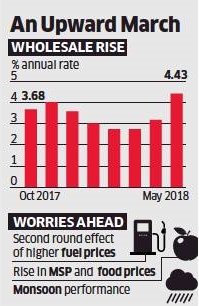 Wholesale inflation accelerated to a 14-month high in May, driven by a broad-based increase in prices that had spilled over to the retail level as well.

The increase last month was the fastest since March 2017, when WPI inflation was 5.11%.

Data released earlier this week showed the rate of consumer inflation rose to a four-month high of 4.87% in May. The Reserve Bank of India increased the key interest rate by 25 basis points on June 6, forecasting a rise in inflation.

Prices of food articles rose 1.6% in May as against 0.87% in April as rates of fruits, onions, potatoes and vegetables rose.

The increase in fuel and power prices, at 11.2%, was the highest, in line with rising global crude oil rates. Comparatively, prices in this segment rose 7.85% in April and 11.81% in May last year.

Prices of manufactured products, which make up almost twothirds of the index, jumped 3.73% compared with 3.11% in April.

The government revised WPI for March upwards to 2.74% from the provisional estimate of 2.47%.

Key factors that could influence the inflation trajectory include the level at which global crude prices stabilise and the extent to which they are transmitted to domestic fuel prices, the trend in monsoon dispersion and the extent of changes in the minimum support prices offered by the government for crops.