Bids for E-way from Mumbai to Nagpur finalized 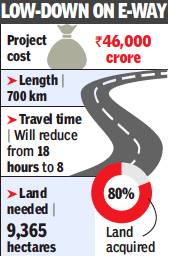 Work on the Mumbai-Nagpur expressway, which is expected to cut travel time between the cities by 10 hours, may begin soon—the state’s road development agency has finalised the lowest bidders for 13 of the 16 major contracts on the Rs.45,000-cr project.

Once work orders are issued, it will be the largest ever highway project awarded in India. The biggest awarded so far (in packages) have been Kishangarh-Udaipur-Ahmedabad (650 km) and Narasinghpur-Chhindwara-Nagpur and Nagpur-Betul (421 km), both under the UPA.

The 700-km Mumbai-Nagpur corridor, touted as a “super communication highway”, will run through 10 districts. On Thursday, MSRDC announced the 13 lowest bids in the fray.

Construction of the Maharashtra Samruddhi Mahamarg, as the Mumbai-Nagpur expressway is known, has been divided into 16 packages; the bidding process for three packages is still underway.

The state has so far acquired 80.3% of the 9,000-odd hectares required for the road, both private and government land, against a total compensation of Rs.4,788 crore, which was paid towards acquisition of private land. Of the land required, 833.2 hectares is government-owned, which includes forest land.

The highway is likely to cut travel time between Mumbai and Aurangabad to 4 hours and between Aurangabad and Nagpur to 4 hours. It will bring 14 major tourist destinations closer and enable development of over 17 industry-based townships along the corridor.

The cabinet on May 29 approved a tripartite concession agreement to be signed for the project. It will be signed between Maharashtra State Road Development Corporation, state government and a special purpose vehicle. The cabinet committee on infrastructure approved a greenfield alignment for the expressway and the MSRDC was appointed the implementing agency in 2015.

The preparation of a detailed project report is on and fundraising from financial institutions is in progress. Officials said the final cost of the project and the concessions to be given to contractors will be approved by the state finance department.