Of Water Conservation and Profitable Farmers 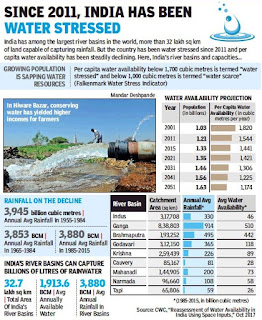 In the last 25 years, farmers in Hiware Bazar, a tiny village in the arid zone of Maharashtra, have increased their income by an estimated 38 times. But it’s not a miracle, insists village sarpanch Popatrao Pawar, who says the village faced a severe water crisis earlier. The village gets 200-300mm rainfall annually and farmers would migrate in search of work during the summer.

Inspired by Ralegan Siddhi’s water conservation work, Pawar and other villagers started water conservation, rainwater harvesting and watershed management initiatives in the 1990s. Villagers vowed not to let a single drop of rainwater flow out of the village. But this wasn’t enough considering the scanty rainfall. So, they changed cropping patterns and resolved to stop growing the water-guzzling sugarcane, opting for vegetables, pulses, flowers and fruit cultivation.

The villagers meet every December 31 to review water availability and decide the crops to grow. Hiware Bazar, perhaps, is the country’s only village with a water budget. If there is a deficit, farmers take a collective break from farming. But this does not affect their earnings, says Pawar, adding the farmers have a strong dairy business, producing 4,000 litres of milk daily.

Villagers made farming a profitable venture and no family lives below the poverty line. In the last 25 years, Hiware Bazar has not called for a water tanker and over 42 families that had left the village returned. Groundwater is now available at just 20-40 ft in Hiware Bazar while surrounding villages must dig 300-400 ft.

Villagers of Kadwanchi located in the drought-prone Marathwada region in Maharashtra have multiplied their income through watershed management since 1995. They undertake strict water and soil conservation and dig farm ponds to save rainwater and turned to grape cultivation using drip irrigation. A survey, by the central research institute of dryland agriculture, noted average annual incomes of farmers in the village increased from Rs.40,000 in 1996 to Rs.3.2 lakh in 2012, a 700% rise.

It took farmers in Julwaniya Chota in Madhya Pradesh three years to double their income while some villages in Andhra Pradesh increased their income 2-3 times in the last few years according to research by Delhi-based Centre for Science and Environment. These villages used simple traditional wisdom, the CSE report said, adding that every village can meet its water needs by capturing enough rainwater to meet drinking and cooking needs.

Lapodia, a village of 200 households in Rajasthan, has opted for a model of square dykes to trap rain water. Families here earn sufficiently just by selling milk. Eklava village in Gujarat has collected rainwater over the past 12 years — every house has an underground water tank built near the house to store rainwater that is used for drinking and cooking purposes throughout the year.

These villages represent a new polarization India is going through, states the CSE — those who harvest water and those who don’t.