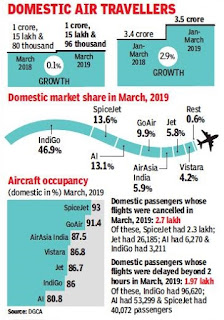 India’s domestic air travel rise has flat-lined after 52 straight months of double and two months of single-digit growth. This March saw 1 crore-15,96,000 domestic passengers, up just 0.1% from 1 crore-15,80,000 in the same month last year. This was due to the sudden grounding of planes—13 Boeing 737 Max of SpiceJet on March 13 and lessors taking back 35 of Jet Airways during the month.

Till recently, low-cost carriers accounted for almost two-thirds of all domestic air travellers. However in March this year, for the first time in Indian aviation history, 76.9% of domestic passengers flew low-cost airlines. The rest 23.1% flew with Air India, Jet and Vistara in the same month. The reduced capacity saw spot airfares going through the roof, which led to fewer people opting to fly.

And the cancellations, as per the DGCA data for March 2019, saw 2.7 lakh domestic passengers finding their flights cancelled. The big chunk of passengers whose flights were cancelled were of Spice-Jet (2.3 lakh) and Jet (26,185).

The combined result was fewer people taking to the skies, crashing the growth in March 2019 over same month last year to 0.1%. A far cry from the heady days of growth Indian aviation had witnessed in the last five years, mainly on account of low oil prices till early 2018 that saw airlines offering low fares and flying becoming affordable.

October 2018 was the 50th straight months of double-digit growth (over the same month in previous year). In these months, peak growth was almost 30% for a few months in 2015-16. The past few months had seen airlines hiking fares due to several reasons like jet fuel getting costlier, rupee crashing and lower capacity. So the growth rate was falling, but was still at decent levels.

December 2018 was the last month of double digit growth when India had 1.3 crore domestic passengers, up 12.9% from December 2018. In January and February, the domestic growth rate had declined to 9.1% and 5.6%, respectively. But the grounding of Boeing 737 Max and Jet crisis have virtually flat-lined the growth story for what not so long back was the world’s fastest growing aviation market.

While Jet’s taking off again depends on its ongoing sale process being successful, the government is trying to revive growth by asking other airlines to speed up their aircraft induction to fill in the gap created by the airline.

Airlines say the impact of high-cost structure for Indian carriers is that today there is only one airline, Air India—which is also on ventilator— that operates widebody aircraft to medium and long-haul destinations like Europe, North America and Australia.

The drop in the number of flights of Jet and SpiceJet pushed up aircraft occupancy for all airlines in the lean travel months with all big players seeing their domestic flights going over 86% full, except Air India for which this figure was 80.8%.

Domestic air travel growth is likely to stage some recovery as airlines are speeding up their aircraft induction after Jet suspended operations. SpiceJet is planning to operate almost 30 of Jet’s Boeing 737s while AI and AI Express are looking at both the wide and narrow body of Jet for international flights. The aviation ministry is giving Jet’s unutilised slots to other airlines for three months.