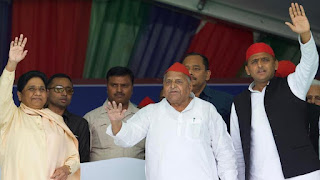 BSP chief Mayawati and SP patriarch Mulayam Singh Yadav created history by sharing the dais at an election rally in Mainpuri, Uttar Pradesh, which is considered to be an SP “stronghold”.

It also marked the end of bitter hostilities between the two leaders that began following the state guest house incident of 1995. After two years in a coalition government in UP, SP and BSP parted ways in 1995 when Mayawati was allegedly assaulted by SP cadres in a VVIP guest house in Lucknow.

While Mayawati described Mulayam as the ‘real leader of the backwards’, the SP patriarch said he would be grateful if she sought votes for him. “ Mayawati and I are on the same dais after a long time, we welcome and thank her...” he said.

At the very beginning of her speech, Mayawati referred to the guest house incident and defended her alliance with the SP. “During the announcement of this alliance, I had already given my reply. I don’t want to repeat. Tough decisions have to be taken in the interest of the party and the nation,” she said. She praised Mulayam for his contribution to the society, particularly the backward classes. “He is the real face of the backwards. He is not a 'naqli' or 'farzi' backward (leader) like Narendra Modi…,” she said. Referring to the PM Narendra Modi’s “sarab” comment on BSP-SP-RLD alliance, she claimed BJP is intoxicated with power and would be dislodged from the Centre after the elections. She also targeted the Congress and called its Nyay scheme "a drama".

She said Mulayam has connected with every section of the society under the SP banner.

On PM Modi, Mayawati said, “He (Modi) claims to be an OBC leader but has done nothing for backward classes and Dalits.”

Mulayam, who spoke before Mayawati, told the gathering that he has always respected her. “Mayawatiji ne saath diya hai. Hamne bhi diya hai…Aapke iss ehsaan ko kabhi nahi bhoolunga. (She has supported us. We have also supported her---- Will always be grateful to you…),” Mulayam said, adding that this is his last election.

Mayawati too tried sending out a positive message at the end of her speech. “Jai Bhim, Jai Lohia and Jai Bharat,” she said. While Jai Bhim is her party’s customary slogan, Jai Lohia is in reference to SP’s icon Ram Manohar Lohia.

Old leaders, who had witnessed the coming together of BSP founder Kanshi Ram and SP patriarch Mulayam Singh in the late 1990s, recalled that Mulayam had always showed respect for Mayawati during those days. “Then she was a member of the Lok Sabha. Mulayam never forgot to mention Mayawati’s name during his speeches in different rallies,” recalled one SP leader. According to him, that period was the beginning of the backward as well as Dalit politics in the state.

“The Ayodhya movement was at its peak. Mayawati was second popular face of the BSP movement after Kanshi Ram. So, he always ensured full respect for her,” the source said. Akhilesh, who also spoke at the rally, said the country will get a new prime minister after the polls.