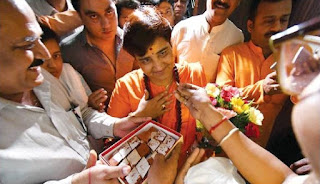 BJP announced Sadhvi Pragya Singh Thakur as its candidate for Bhopal constituency against Congress leader Digvijaya Singh. Thakur was an accused in the 2008 Malegaon blast case that killed nine. Pragya’s entry is likely to see a polarised campaign in a seat which has over 26% Muslims and 69% Hindus. Thakur has exuded confidence of winning the seat and warned all those referring to ‘saffron terror’. She said she will ‘restore dignity’ of saffron.

Thakur faced charges under Maharashtra Control of Organised Crime Act but was absolved of them though she still faces other charges, including under the Unlawful Activities (Prevention) Act.

She was imprisoned for nine years and has alleged that she was tortured during her incarceration that led to spinal injuries.

In the 2008 blasts, two bombs were fitted into rigged motorcycles and left near a hotel at Bhikku Chowk in Malegaon, 270 km from Mumbai. The blasts were of low intensity but 9 people were killed and scores injured. Two years prior to this, there was another blast in Malegaon near a mosque in which 40 worshippers were killed. The term ‘saffron terror’ was reportedly coined after the 2008 blasts, following the arrest of Thakur and Colonel Srikant Purohit, a co-accused, in the case. Digvijaya Singh has often used the term while targeting BJP.

According to BJP insiders, Thakur’s candidature has been at the behest of RSS, the Sangh fountainhead. The RSS and its affiliate organisations are expected to actively campaign for Thakur. Singh has been at the forefront of attacking the RSS but Bhopal has remained a BJP bastion since 1989. The last Congress candidate to represent the seat was KN Pradhan, elected in the ‘Congress wave’ of 1984, following the assassination of Indira Gandhi. 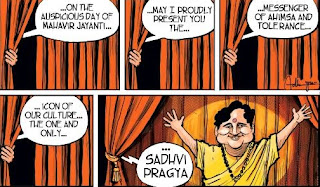