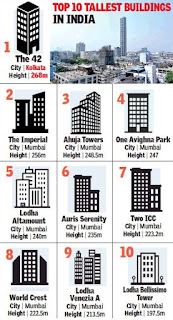 When the roof of the 65th floor was cast at 42 Chowringhee (JN Road) in Kolkata earlier this month, it became the tallest building in India, pipping The Imperial in south Mumbai. Overlooking the Maidan and Hooghly river, it has reshaped Kolkata’s skyline,dwarfing buildings like Tata Centre, Chatterjee International and Everest House that had dominated the skyline for over five decades.

“The construction of The 42 has been completed. At 268 metre, it is now the tallest building in India. It would have been the second-tallest, had the additional four floors that were later sanctioned, not been constructed,” AN Shroff of Alcove Realty, one of the three companies that formed a consortium to develop the ultra-premium residential project, said.

The skyline behind Science City off EM Bypass is also changing dramatically with a cluster of three high profile projects — two residential and one commercial — in various stages of development.