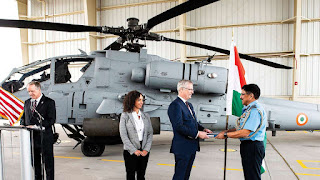 The first of the 22 Apache Guardian attack helicopters, often called “tanks in the air” as they are armed with deadly missiles and rockets, has been formally handed over to the IAF at the Boeing production facility in Arizona, US.

The first batch of these heavy-duty helicopters will be shipped to India by July, with all of them slated for induction by March 2020 under the Rs.13,952-crore deal inked in September 2015.

This comes shortly after the IAF also began the induction of another iconic US helicopter, the Chinook, in March. The IAF had ordered 15 Chinooks, capable of transporting howitzers and troops to forward and high-altitude areas with China and Pakistan, under another Rs.8,048-crore deal inked in September 2015.

Catering for both the western and eastern fronts, the Chinooks will be based in Chandigarh and Dinjan (Assam), while the Apaches will be based at the Pathankot and Jorhat airbases.

“The helicopters will have significant capability in mountainous terrain. They will have the capability to carry out precision attacks at stand-off ranges and operate in hostile airspace with threats from ground,” he said.

Select air and ground crew members for the Apaches have undergone training at the US Army base Fort Rucker, Alabama.The Navy, incidentally, is also slated to induct 24 multirole MH-60 ‘Romeo’ helicopters from the US.