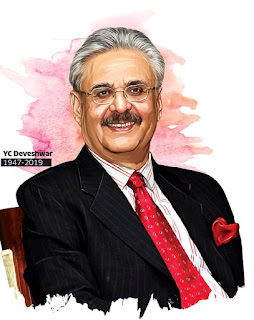 Yogesh Chander Deveshwar, the visionary chairman of ITC Ltd, who transformed the cigarette maker into a successful conglomerate encompassing hospitality, FMCG, agribusiness, paper and packaging, passed away at a hospital in Gurgaon on Saturday morning. He was 72.

YCD, as he was popularly referred to in corporate circles, remained the face of ITC. He nurtured the company all his professional life, having joined it in 1968, as a young man straight out of IIT-Delhi. His talent was spotted soon after by its celebrated chairman AN Haksar. Deveshwar is a rare example of an executive in India Inc who rose through the ranks of a company and got nominated for a board role in just 16 years. Eventually, he became chief executive and chairman of ITC in 1996 when he was 49.

In 2017, Deveshwar retired from the executive role of the company because of his ill health but remained a mentor to the next leader, considering the complex, multifaceted organisation ITC is. The company appointed Sanjiv Puri as managing director for day-to-day affairs, while Deveshwar was nominated as non-executive chairman till 2022. He remained in the thick of things till his last breath, becoming the longest serving chairman of ITC for 23 years.

Prime Minister Narendra Modi recalled his achievements in a tweet: “His efforts helped ITC become a professionally-run Indian company with a global footprint.”

During YCD’s chairmanship till FY18, ITC’s non-cigarette businesses grew 19-fold, constituting 59% of net segment revenue of the company. ITC now deploys over 80% of operating capital in such businesses where 90% of employees are engaged.

As of March 2018, ITC’s gross sales value expanded to ₹67,081 crore and it posted a net profit of ₹11,223 crore. It has created more than 25 mother brands in FMCG, from Aashirvaad and Sunfeast to Classmate and Bingo. (ITC will declare its FY19 financial result on Monday.) According to Deveshwar, building successful Indian brands has been ITC’s biggest achievement in an FMCG market dominated by multinational companies. He laid down a long-term vision for ITC: to grow the FMCG business revenue to ₹1 lakh crore by 2030 and overtake Hindustan Unilever. In FY18, the business was ₹11,328 crore.

Deveshwar strongly opposed royalty payments to MNCs by their Indian subsidiaries. He argued that it should be subject to the standard rate of corporate tax. Even at last year’s AGM, he said there was a large outflow of value from the country on account of royalty and other payments. SEBI’s recent proposal to cap royalty pay at 2%, although resisted by many, including the Finance Ministry, probably has its genesis in Deveshwar’s stance.

Deveshwar tapped India’s villages: while e- Choupal linked the company with the farmers through the internet, the company also ventured into the FMCG space in rural areas.

The only time Deveshwar took a break from ITC was in 1991-94 — to run Air India. On his return to ITC, he became vice-chairman before taking the top job two years later. These were turbulent times at the company as its largest shareholder, British American Tobacco (BAT), was at loggerheads with the management led by Deveshwar’s predecessor KL Chugh. The company also had to deal with allegations that it violated the Foreign Exchange Regulation Act. Deveshwar worked hard to ensure that SUUTI stake in ITC was not sold to BAT. He believed that BAT was only interested in tobacco and would reverse ITC’s FMCG foray.

YCD’s concerns grew as the surging taxation shrank the cigarette market where ITC has a 70% share. This was squeezing the company’s money spinner.

In his condolence message, ITC MD Puri said Deveshwar had passionately championed the cause for sustainable and inclusive growth and the transformative role businesses could play in creating larger societal value. “Inspired by a patriotic fervour, manifest in his clarion call of Let’s Put India First, he led ITC’s strategic thrust to create an exemplary Indian enterprise dedicated to serving national priorities,” he said.

Deveshwar was awarded the Padma Bhushan in 2011 and the ET Award for Lifetime Achievement in 2017. 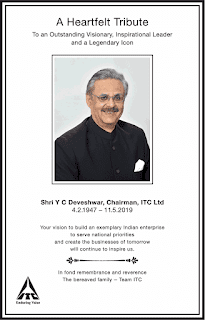