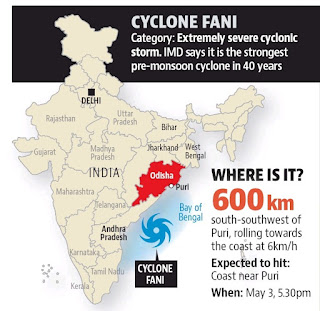 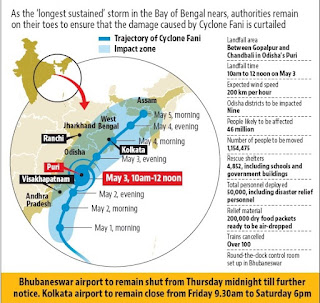 More than a million people are being moved to safety as a tense Odisha battens down the hatches to take on the might of the “extremely severe” cyclone Fani, which is set to make landfall near Puri between 8 am and 10 am on Friday.

An estimated 10,000 villages and 52 towns in Odisha will come in the path of the cyclone, which could see winds gusting up to 225 kmph, the Union home ministry said after PM Narendra Modi held a top level meeting to assess preparations for the cyclone.

This could be the first time since the 1999 Super Cyclone that the state would bear the brunt of such a severe storm. The 1999 cyclone killed nearly 10,000 people and battered the state with winds of 270-300 kmph. Cyclone Fani is expected to remain “extremely severe” for four to six hours after landfall, IMD officials said in New Delhi. It will then gradually weaken.

The meteorological department warned of “total destruction” of thatched huts and kutcha houses, major damage to roads and crops, the uprooting of power poles and potential danger from flying objects as the storm moves north-northeastwards after landfall, and sweeps through Khurda, Cuttack, Jajpur, Bhadrak and Balasore districts before moving to neighbouring West Bengal and then to Bangladesh.

In a massive operation, around eight lakh people were evacuated from low-lying areas by 7 pm on Thursday and more were being shifted to the safety of storm shelters in coastal areas.

Rail, road and air traffic have been completely suspended in the coastal districts. All flight operations at Biju Patnaik International Airport will be suspended for 24 hours from Thursday midnight. Kolkata airport, too, will remain shut Friday night till 6 pm on Saturday. Operations at Paradip, Gopalpur and Dhamra ports have been closed.

The Election Commission of India has, meanwhile, lifted the model code of conduct from 11 districts to facilitate rescue and relief measures. It has also approved shifting of polled EVMs of four assembly constituencies in Gajapati and Jagatsinghpur districts to safer places. 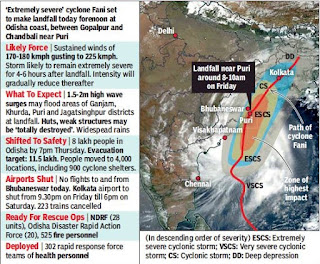