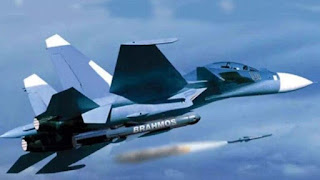 The supersonic BrahMos cruise missile, with a strike range of 290-km, was tested from a front-line Sukhoi-30MKI fighter jet in the Andaman and Nicobar archipelago, in yet another step towards the country acquiring formidable precision strike capability from long or “standoff ” distances.

This was the second test firing of the air-launched version of the BrahMos missile, which flies almost three times the speed of sound at Mach 2.8, after the first was conducted over the Bay of Bengal in November 2017.

The BrahMos missile, whose range is now being extended, in conjunction with the Sukhoi-30MKI fighter, which has a cruising range of 3,200-km or a combat radius of about 1,500-km without mid-air refuelling, constitutes a deadly weapons package. It can be used to take out terror camps, underground nuclear bunkers, aircraft carriers on the high seas and other military targets from “stand-off” distances by day or night in all weather conditions.

“The launch of the missile, which weighs 2.5 tonne, from the aircraft was smooth. The missile followed the desired trajectory before directly hitting the land target,” said IAF spokesperson Group Captain Anupam Banerjee.

“The integration of BrahMos on the Sukhoi-30MKI was a complex process involving multiple modifications on the aircraft. The capability of the missile coupled with the superlative performance of the Sukhoi-30MKI aircraft gives the IAF the desired strategic reach,” he added.

The Army is now inducting the 4th BrahMos Regiment, which will be the missile’s Block-III version that has steep dive, trajectory manoeuver and top-attack capabilities, while the Navy has deployed the BrahMos missiles on over 10 frontline warships. The IAF, in turn, has inducted two squadrons of the land-launch missiles, even as the force waits for the air launched version.