The leader with largest popular mandate in the world 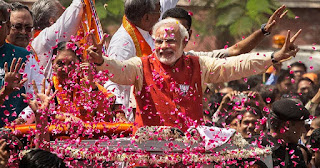 Narendra Modi now is the leader with the largest popular mandate in the world. In 2014, US President Obama, meeting Modi in Myanmar on the sidelines of the Asean summit, declared, “this man has the biggest electoral victory of all of us”. In 2019 that holds even more true.

Modi is the only world leader to win so convincingly in a hotly contested, democratic system, which carries a unique equity among the global elite. His friend Benjamin Netanyahu, who recently won a tough Israeli elections securing a record fifth term for himself, managed a 65-seat majority with the help of smaller religious parties. In Japan, PM Shinzo Abe is comfortably placed, but the numbers are more modest. The only other big number victory recently has been Joko Widodo in Indonesia, while Scott Morrison — who also called Modi to congratulate — pulled off a surprise win in Australia, but barely scraped through.

But other world leaders are precariously placed. In the UK, Theresa May’s government stands on the precipice over her Brexit deal. French President Emmanuel Macron and German Chancellor Angela Merkel are struggling. Recep Erdogan and Vladimir Putin, who see themselves as strongmen leaders of Turkey and Russia respectively, are not nearly as secure as they seem. Donald Trump is the US President with a slender margin. Despite the different system, Xi Jinping is the only other world leader with comparable support.

In the coming month, Modi will be at SCO, G20 and G7 summits, where issues of global governance will be at the forefront. In his previous term, Modi did not shy away from engagement in the forums — he believes India should become a “leading power” articulating India’s aspirations in the world, wanting to make India part of global solutions. So expect new global ideas to emerge from Modi in the coming weeks.