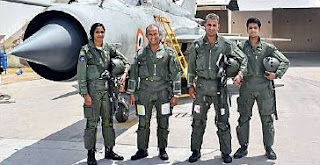 Flight Lieutenant Bhawana Kanth can now go to battle in her MiG-21 ‘Bison’ supersonic jet. She is IAF’s first woman fighter pilot to become “fully ops (operational) by day”. Though Bhawana, who hails from Bihar’s Darbhanga, can be deployed for day-time missions, her gruelling training regime in handling the highly demanding and ageing MiG-21s, which have virtually the highest landing and takeoff speed in the world at 340 kmph, is not yet over.

She will have to now learn night flying during the “moon” and “dark phases” to become a fully operational fighter pilot.

“She is the first woman fighter pilot to qualify to undertake missions by day on a fighter aircraft. Bhawana joined her fighter squadron in November 2017 after initial flying on Pilatus turbo-props and Kiran trainers as well as Hawk advanced jet trainers. She flew her first solo on a MiG-21 Bison in March 2018,” said IAF spokesperson Group Captain Anupam Banerjee.

Bhawana had earlier said it was her “dream to fly like a free bird” when she was growing up in the refinery township of Begusarai, where her father was an engineer in IOCL. Before being commissioned into fighter stream after basic training in June 2016, Bhawana completed her BE (Medical Electronics) from BMS College of Engineering at Bengaluru and is into adventure sports like trekking, rappelling and rafting.

The IAF has so far inducted six women into its fighter flying stream on “an experimental basis” for five years. With it taking around Rs 15 crore to train a single fighter pilot, IAF had for long resisted inducting women because it felt it would disrupt “tight fighter-flying schedules” if they got married and had children.

But women like Bhawana, who learnt tactical flying and manoeuvres after consolidating her general handling of MiG-21s in multiple solo sorties, and the others have shattered the glass ceiling. The IAF didn’t show favouritism to Avani and Bhawana, who were posted to MiG-21squadrons rather than the easier-to-handle modern fighters like Sukhoi-30MKIs or Mirage-2000s. This will ensure they undertake “air defence missions” over Indian territory in the event of war (MiG-21s are meant to intercept incoming enemy aircraft), and not go strike deep into enemy territory.