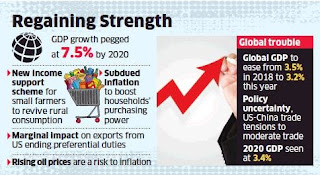 India’s economic growth will regain strength and approach 7.5% by 2020, buoyed by rural consumption and subdued inflation, the Organisation for Economic Co-operation and Development said in its Economic Outlook even as a United Nations report showed India remaining the fastest-growing major economy.

The UN World Economic Situation and Prospects, in its mid-year update, projected that India will grow 7.1% in fiscal year 2020 on the back of strong domestic consumption and investment, slower than the 7.4% estimated in January. It expects the Indian economy to expand 7% in 2019 compared with its previous estimate of 7.6%. Even after the downward revisions, India remains the fastest-growing major economy in the world, ahead of China.

This growth will come from higher domestic demand due to improved financial conditions, new income support measures for farmers and recent structural reforms. Lower oil prices and the recent appreciation of the rupee will reduce pressure on inflation and the current account.

Highlighting that India has the fastest growth among G20 economies with export growth holding up well, it said: “Investment growth will accelerate as capacity utilisation rises, interest rates decline, and geopolitical tensions and political uncertainty are assumed to wane.”

India’s economy grew at a six-quarter low of 6.6% in the October-December period. The statistics office will release the quarterly GDP estimate for January-March and provisional annual estimate for 2018-19 on May 31.

“Global growth has slowed abruptly over the past year, with the weakness seen in the latter half of 2018 continuing in the early part of 2019 amidst persisting trade tensions,” the organisation said, urging governments to resolve their trade disputes.

The OECD expects India’s monetary policy to be loosened somewhat as headline inflation remains well below target and inflation expectations are adjusting down.

India’s retail inflation was 2.92% in April. The Reserve Bank of India, which had last month cut interest rates by 0.25%, estimates retail inflation of 2.9-3% during April to September because of lower food and fuel prices and expectations of a normal monsoon.

The report suggested that an improved collection of the Goods and Services Tax and a wider base of personal income tax will help reduce the high public debt-to-GDP ratio.

Besides, ensuring a swift resolution of bankruptcy processes would help contain non-performing loans and boost productivity by promoting the reallocation of resources to more productive firms and sectors.

Investment has continued to grow robustly, supported by hefty public sector projects. In contrast, private investment, especially in manufacturing, had been affected by uncertainty ahead of the parliamentary elections, combined with persistent difficulties in financing projects, acquiring land and getting all clearances. Rural consumption and twowheeler and tractor sales have slowed on account of subdued agricultural prices and wages.