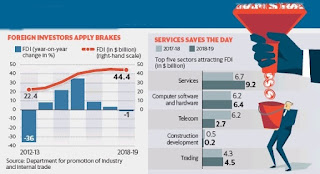 FDI equity inflows into India declined 1% to $44.4 billion in the year to 31 March, signalling a squeeze in long term foreign investment into the country.

The decline in FDI inflows comes at a time when domestic indicators already point towards a slowdown in consumption and investment activity. India’s economy grew at the slowest pace in five quarters at 6.6% in the three months ended December, prompting the statistics department to trim its 2018-19 forecast from the 7.2% previously forecast to 7% in February. The first set of macro data the new government will have to deal with is the fourth-quarter GDP data (to be announced on 31 May) that may further decelerate to 6.4%.

However, FDI in the services sector, including financial, banking, insurance and outsourcing businesses, rose 37.3% in 2018-19, arresting the extent of the decline in FDI inflows.

The telecom sector is going through tumultuous times after Reliance Jio Infocomm Ltd’s entry in September 2016 brought data tariffs to rock bottom and made voice calls free, making the sector less attractive for foreign investors. In the case of pharmaceuticals, the price control mechanism introduced by the government on several essential medicines might have discouraged foreign investment.

Capital gains on investments made in India through companies in Mauritius and Singapore have become fully taxable from 1 April, as concessions cease to exist on the routes after India signed new
double tax avoidance treaties with both countries. This may further impact FDI inflows into India from these two countries.

Macro indicators such as vehicle sales and air passenger growth also point to a slowdown in the economy.

Sales of automobiles across segments in India fell 16% in April to touch the lowest in eight years, while domestic air travel in April contracted 4.5% for the first time in nearly five years. The government in its full budget, which is likely to be presented in July, will be tempted to breach fiscal discipline and go for a demand stimulus.