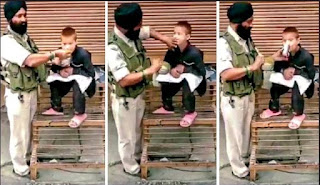 A 31-second video showing a CRPF jawan posted in Nawakadal area of downtown Srinagar feeding rice and dal to a paralytic Kashmiri boy has gone viral on social media. Besides wiping the child’s face with his hand, the jawan is seen helping the boy drink water.

On Monday, Iqbal Singh, who was on duty in the area, was about to have his lunch when he spotted this boy sitting on the iron steps of a building. Wearing a black kurta and pyjama, the little boy looked hungry and helpless. Iqbal, who was part of the convoy that was attacked by Jaish-e-Mohammad terrorists in Pulwama on February 14, instantly decided to do something for the boy. Soon, he opened his lunchbox and fed the boy dal-rice, which he had got for himself.

The video of Iqbal’s act was shared by over 1,000 people, including Kashmiris and the J&K Police, in seconds and his humane gesture drew all-round appreciation.

Hailing the gesture of Iqbal, the director general of CRPF awarded him with DG’s Disc and a commendation certificate.

The CRPF handle tweeted: “Humanity is the mother of all religions. HC Driver Iqbal Singh of 49 Bn Srinagar Sector CRPF deployed on LO duty feeds a paralysed Kashmiri kid in Nawakadal area of Srinagar. In the end, asks him ‘Do you need water?’ Valour and compassion are two sides of the same coin.”

Former chief minister and PDP chief Mehbooba Mufti tweeted: “Armed forces operating in Kashmir are often tarred with the same brush. But that generalisation can sometimes be grossly unfair. Salute this man’s sense of compassion and humanity.”

Basharath Dar, a Raj Bagh area engineer, who also received the video in his Facebook account, shared the same with hundreds of his social-media friends. “This was really a touching video, which was self-explanatory. This sent out a positive image of the security forces all over. This is the real human face of the forces and we Kashmiris should take note of this as well,” Dar said.