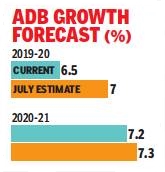 The Asian Development Bank revised its outlook for India’s economy. Growth is now expected at 6.5% in fiscal 2019-20, following weaker expansion in the first quarter of the year, with slower growth in consumption and investment affecting the manufacturing and service sectors.

In an update of the Asian Development Outlook 2019, the Manila-based ADB said proactive policy interventions, along with a recovery in domestic demand and investments, will likely see the economy pick up in fiscal 2020-21, growing by 7.2%.

In July, ADB had forecast 7% growth for 2019-20 and 7.3% in 2020-21. Growth slowed to an over six-year low of 5% in the April-June quarter, triggering calls for measures to accelerate expansion. The government has unveiled a string of measures, including a Rs.1.45-lakh-crore corporate tax rate cut, which is expected to revive sentiment and growth in Asia’s third largest economy.

“India will remain as one of the fastest-growing economies in the world this year and next year as the government continues to implement policy reforms and interventions to strengthen economic fundamentals,” said ADB chief economist Yasuyuki Sawada.

Significant corporate tax cuts, announced by the government, will uplift private investment, including FDI, and enhance India’s global competitiveness. Bank recapitalisation, support measures for NBFCs, and cuts in monetary policy rates should improve the health of the financial sector, while increasing the credit flow to industry and infrastructure projects.