The White House has formally confirmed that US President Donald Trump will participate in the ‘Howdy, Modi’ rally in Houston, Texas, on September 22 leading up to PM Narendra Modi’s visit to the US next week. The joint appearance at such a large rally will be unprecedented in the annals of US-India relations, and indeed in the chronicles of US ties with any country.

“The event, ‘Howdy, Modi! Shared Dreams, Bright Futures’, is expected to draw tens of thousands of people. It will be a great opportunity to emphasize the strong ties between the people of the United States and India, to reaffirm the strategic partnership between the world’s oldest and largest democracies, and to discuss ways to deepen their energy and trade relationship,” the White House said in an announcement affirming Trump’s decision to attend the event.

Modi has also expressed delight over Trump joining the event. “A special gesture by @POTUS, signifying the special friendship between India and USA! Delighted that President @realDonald-Tru- mp will join the community programme in Houston on the 22nd. Looking forward to joining the Indian origin community in welcoming him at the programme,” he tweeted on Monday. “The special gesture of President @realDonaldTrump to join us in Houston highlights the strength of the relationship and recognition of the contribution of the Indian community to American society and economy.”

The Houston rally, the third such event by PM Modi in the US after breakthrough public meetings in New York at the Madison Square Gardens in 2014 and in Silicon Valley in 2017, is expected to surpass anything hosted for or by a foreign leader on American soil. Texas India Forum that is hosting the event, said over 50,000 attendees have registered in three weeks for the sold-out event. In fact, it is hard to recall an instance of such a large political rally in US, not even for Trump or his predecessor Barack Obama at the peak of their popularity. Crowds of this size are only seen at major sporting events such as the Superbowl.

Beyond Trump’s fondness for crowds and spectacle, his decision to attend the rally also has three elements to it.

The primary purpose, as underscored by the White House, is to showcase the close ties between the two nations, a significant signal given tensions in the subcontinent. But there are also domestic reasons for Trump’s decision. Aside from being the fourth-largest US city, Houston is also its energy capital. And India is a large energy guzzler that is buying significant amounts of oil and gas from the US, a supply that is expected to go up given the disruption in the Gulf. A third reason for Trump’s decision to attend has to do with domestic politics. Texas could be up for grabs in 2020 and the over 2.5 lakh Indian-American votes would matter. Although it has been Republican since 1976, it is said to be turning purple, and Democrats are hoping for an upset. 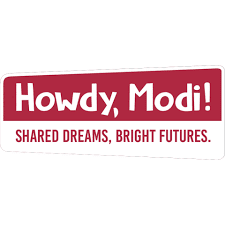