MahaMumbai rising in shadow of second airport gets DP 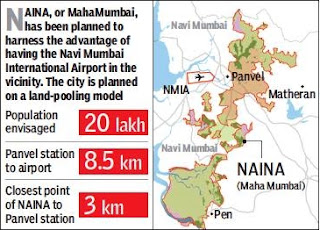 The Devendra Fadnavis government earlier this week issued a notification granting sanction to the development plan for NAINA, now better known as MahaMumbai, a city in the making in the expanding Mumbai Metropolitan Region.

Spread over 371.37 sq km, the new city is designed to serve a population of 20 lakh. The city is in the proximity of the upcoming international airport — NAINA stands for Navi Mumbai Airport Influence Notified Area — and has been envisioned on land holding 175 villages.

Of these 175 villages, 23 already have a sanctioned plan by way of an interim DP covering around 37 sq km.

Issued on September 18, the latest government notification granted sanction for the DP for the remaining 152 villages that cover more than 334 sq km.

As 23 villages interim development plan was sanctioned earlier for , the total NAINA city is 175 villages and an area of over 371 sq km.

“The new city will be developed as a model city with best public transport system,” Cidco MD Lokesh Chandra said. “It is near the new airport and will help decongest the growing and expanding Mumbai. The FSI is 2.5 and it will be a planned city.”

NAINA was planned to harness the advantage of having the Rs.16,000 crore international airport in the vicinity by facilitating warehousing and production centres. A multi-modal corridor to link Virar on the western fringe is also planned.

The city was planned under the land pooling system and was not the result of acquisition, as in the case of Navi Mumbai. The model was worked out around what was called the 60:40 formula, wherein landholders received net 40% of their original plot size in the scheme area. As a result, landowners need not provide further open space, amenities or EWS (economically weaker section) housing on their plots.

Cidco makes use of 60% of the scheme area to create infrastructure, which inlcudes growth centre, roads, recreational open spaces and other facilities.

“The sanction of the plan means it can now be implemented .... “ chief planner V Venugopal said.