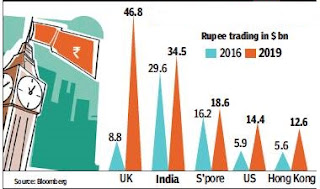 London has overtaken India’s financial capital Mumbai to become the top centre for trading the rupee. That’s adding to a sense of urgency among local authorities to deepen the onshore market.

Average daily volumes for rupee in the UK soared to $46.8 billion in April, a more than five-fold jump from $8.8 billion in 2016, according to the latest survey from the Bank for International Settlements released this week. That exceeded the $34.5 billion recorded in India.

Trading in dollar-rupee offshore non-deliverable forwards increased threefold over the three-year period, the BIS report showed. Alive to the growing size of the offshore rupee market, the government and the RBI have been looking at ways to improve access for overseas investors and offer them more products to ramp up volumes at home.

Rupee trading — including spot, outright forwards, foreign-exchange swaps, and other products — also jumped in Singapore, Hong Kong and the US over the three-year period, according to BIS.

A panel appointed by the RBI last month proposed extending onshore currency trading hours, allowing banks to offer pricing to non-residents at all times and allow trading of non-deliverable forwards in the rupee among steps to deepen trading onshore. Data released by the BIS “now makes an even more compelling case for policy makers to focus on increasing the wallet share of the onshore market”, said Arora.