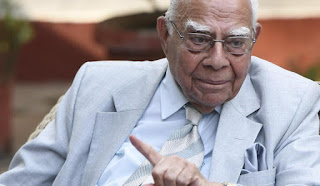 One of India’s most famous lawyers and former Union law minister Ram Jethmalani passed away early this morning in New Delhi, six days short of his 96th birthday.

Among the high-profile cases that Ram Jethmalani fought were those for the assassins of former Prime Ministers Indira Gandhi and Rajiv Gandhi. He also defended Harshad Mehta and Ketan Parekh in stock market scams, Manu Sharma in the Jessica Lal murder case , DMK leader Kanimozhi in the 2G scam. and Delhi chief minister Arvind Kejriwal in a defamation suit filed by the late Arun Jaitley.

He was elected a member of Parliament in the 6th and 7th Lok Sabha on a BJP ticket. Jethmalani was also a member of the current Rajya Sabha. In 2013, the BJP expelled Jethmalani from the party for six years for making anti-party statements.