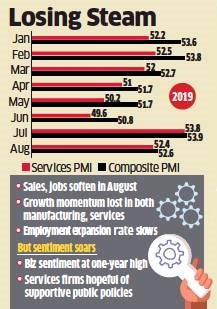 The IHS Markit India Services Purchasing Managers’ Index  declined to 52.4 in August from 53.8 in July. The index remaining above 50 indicates growth; falling below that mark would mean contraction.

IHS Markit had released another survey that showed manufacturing activity in the country slipping to a 15-month low in August.

Put together, the two surveys show that the growth of Indian private sector activity has eased from July's eight-month high, reflecting a slowdown in new business gains.

The IHS Markit India Composite PMI Output Index that maps both the manufacturing and services industries fell to 52.6 in August from 53.9 in July.

As per the service sector survey report, while the upturn was modest companies that signalled growth commented on favourable government policies, improved technology and new business gains.

The slide in PMI has come even as economic growth fell to a six-year low of 5% in the first quarter ended June.

The government has announced a slew of measures to revive the economy. They include opening up foreign direct investment in contract manufacturing, easing norms for overseas investors in single brand retail and coal mining, rolling back enhanced surcharge on foreign portfolio investors.

Service providers remained confident of a rise in business activity in the coming 12 months, with optimism strengthening to a one-year high. Forecasts of better demand, marketing initiatives and accommodative public policies boosted sentiment in August.

Input prices continued to increase, with survey participants reporting higher food, fuel and staff costs. That said, the overall rate of inflation softened in August, according to the survey. 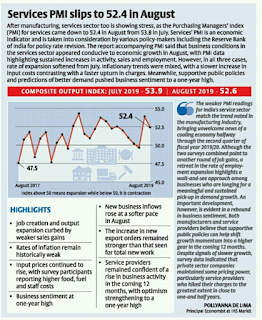