Indian universities out of top 300 in global rankings 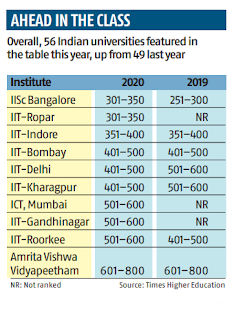 The new world university rankings came as a mixed bag for India with no university featuring in the top 300 for the first time since 2012, though the total number of entries from the country went up from 49 in 2018 to 56 this year.

The high point for India was Indian Institute of Technology, Ropar making it to the top 350 on debut in the list. It now is the joint Indian topper with Indian Institute of Science, Bangalore. In total, there are six Indian universities in the top 500 in this year’s Times Higher Education World University Rankings 2020 as against five in the 2019 rankings. Overall, University of Oxford continues to lead the pack for the fourth consecutive year.

With the increase in the number of Indian universities in the overall 1,300-university list from 92 countries, India is the fifth most-represented nation in the rankings, with 56 institutions. In all, 10 Indian universities which participated for the first time, made it to the global ranking list of 1,300 universities.

The fall of IISc from the 251-300 to 301-350 cohort this year is attributed to a significant dip in its citation impact score offsetting improvements in research environment, teaching environment and industry income. With IISc’s slide, it is for the first time India has failed to make the top 300 in the last seven years. However, the Bengaluru-based institute still ranks highest among all others in India and shares its position with IIT Ropar in the THE list.

THE rankings editor Ellie Bothwell said: “India has a huge amount of potential in global higher education, given its rapidly growing youth population and economy and use of English-language instruction. However, it is disappointing to see the country fall out of the top 300 of the rankings this year, with only a small number of institutions registering progress. The Indian government has strong ambitions to boost the global standing of its top universities and attract foreign students, academics and research collaboration. It now needs to back up these aspirations with high levels of investment or risk declining further amid increasing global competition, especially from other parts of Asia.”

According to THE, the best Indian institutions are generally characterised by relatively strong scores for teaching environment and industry income, but perform poorly when it comes to international outlook in comparison to both regional and international counterparts.

Globally, the United States once again has 60 universities in the top 200.