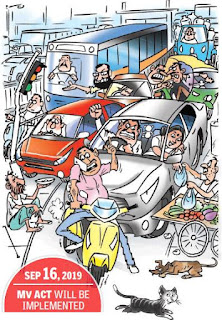 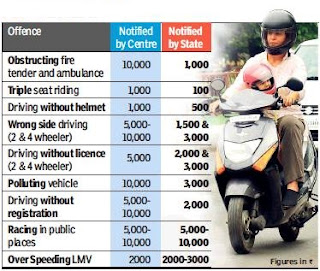 Barely 10 days after the amended Motor Vehicles Act came into force, the Gujarat government on Tuesday notified the fines for some of the traffic offences which are 25 to 90 per cent less than those notified by the Centre.

The state government’s justification to reduce the penalties on “compassionate and humanitarian” ground is now likely to pave way for other states to notify the fines. The Gujarat government reiterated its commitment to ensure safety on roads by emulating Centre’s hefty fine policy for serious offences like rash and drunken driving, which remain unchanged. The new fines will come into force from September 16.

“Our priority is not collecting fines or filing cases against people. However, implementing law is not possible without punitive action. We have taken a compassionate and humanitarian approach and reduced fines. No concessions can be granted in cases where people lose their lives. There will be a sustained clampdown against serious traffic offences,” said chief minister Vijay Rupani.

The Gujarat government has largely tweaked the fines that fall under the “compoundable” offences category, which empowers the state governments to designate officers who can collect the fine on the spot and let the offender go. These include not wearing seat belt, helmet, triple-riding on two-wheelers, speeding, plying vehicles without pollution under control certificate and driving without licence and registration certificate.

As per the law, the states cannot change some of the penalties for offences such as juvenile driving, drunk driving and jumping traffic light. However, there is one exception where the state has reduced penalties for wrong side driving, which is non-compoundable. In such cases, the violator needs to visit court.

Another major dilution is to exempt pillion riders from wearing helmets. “We have taken a moderate stand in this regard as middle class families including wife and children travel on two-wheelers,” said Rupani.

The reduction in fines by the Gujarat government is being seen as a balancing act in the wake of widespread protests, especially in Rupani’s home turf, Rajkot, which has witnessed demonstrations against hefty fines.

The amended MVA provides for Rs.1,000-fine for driving without wearing helmet or seat belt, which Gujarat has reduced to Rs.500.

Obstructing a fire vehicle or ambulance attracts a heavy fine of Rs.10,000 in the Central act. The state government has reduced this to Rs.1,000. 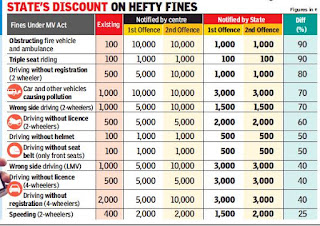 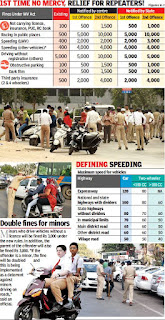 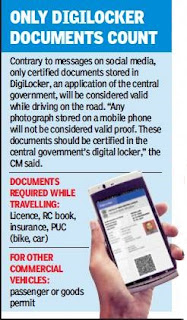