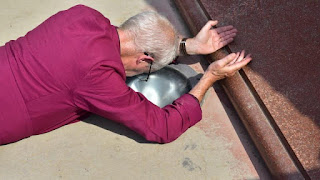 Archbishop of Canterbury, Justin Welby said that he was ashamed and sorry for the Jallianwala Bagh massacre of 1919.

The comments came as Welby concluded his India tour by a visit to the Jallianwala Bagh memorial in Amritsar.

While paying his respects at the memorial, he said, “I cannot speak for the British government. I am not an official of the British government but can speak on the name of Christ. It is a place for sin and redemption. Because you have remembered what they have done and their name will live, their memory will live.”

He also read out a prayer to seek forgiveness from god for the act.

He wrote in the visitor book, “It is deeply humbling and provoke feelings of profound shame to visit this place that witness such atrocities hundred years ago. My first response is to pray for healing of relatives, of descendants, of our relationships with India and its wonderful people. But, that prayer renews in me a desire to pray and act so that together we may learn from history, root out hatred, promote reconciliation and globally seek the common good.”

When asked if he would ask British government to seek an apology for the massacre, he said, “I think have been very clear what I feel and that will be broadcast in England.”

About his experience in India, Welby said, “It has been a pilgrimage. It has been for prayer. It has been for me a lesson of profound learning and privilege that I will never forget. I admire all the potential and hope that this country offers to the world.”