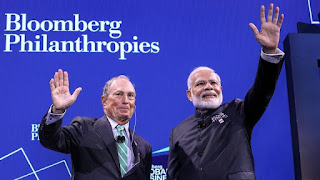 Prime Minister Narendra Modi  invited foreign investors from sectors such as real estate, defence, infrastructure and food to embrace the “golden opportunity to partner India”, as he enumerated measures to liberalise the economy.

Speaking on ‘Restoring Global Stability’ at the Bloomberg Global Business Forum in New York, Modi said the Indian economy had added $1 trillion over the past five years, and aims to become a $5-trillion giant. “We are determined to reach $5 trillion. We have the capability and conditions with us.”

“This is just the beginning, there’s more to come. It’s a golden opportunity to partner India … The government of India respects wealth creation,” Modi told an audience that included former US President Bill Clinton, former IMF chief Christine Lagarde and the CEOs of several Fortune 500 companies.

PM Modi said India was the apt destination for real estate investors. “In the coming years, we will spend around $1.3 trillion on modernising infrastructure .”

“Our people are moving up the economic ladder. Our middle class is a huge segment that has a global outlook,” PM said.

Modi also extended an invitation to defence manufacturers. “We have opened our defence sector like never before. If you want to make in India, for India and the world, come to India. No Indian government has invested in infrastructure as we have.”

Listing India’s giant strides in IT, the PM said, “Our youth are the largest users of the app economy. From food to movies to transport, startups are acing everything. Our infrastructure is expanding at a fast pace. Our optical fiber network is reaching 600,000 villages.”

Owing to reforms, he said, India is climbing every global ranking. “We have focused on simplifying rules. At a time when FDI is shrinking all over the world, it is growing in India.”

Modi said his government had “scrapped 50 old laws that were creating hindrances in the path of development” soon after coming to power during the first stint in 2014.

“Your technology and our talent can change the world. Your scale and our skills can speed up global economic growth … And if there is any gap anywhere, I will personally act as a bridge,” Modi told global investors.