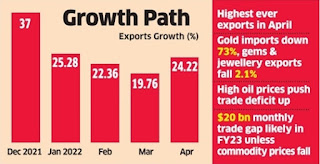 India’s exports shot up over 24% in April to $38.2 billion, driven by a surge in international oil prices. Higher oil prices also had an impact on imports, which went up nearly 27% at $58.3 billion, preliminary data released by the commerce department estimated. This pushed up trade deficit to $20 billion.

Among major commodity groups, petroleum product shipments more than doubled to $7.7 billion, as diesel prices have surged more than crude prices in the global markets after the Ukraine war started.

Electronic exports were the other category to see high growth, rising 64% in April to $1.6 billion. On the import front, if crude oil shipments jumped 81% to 195 billion, coal jumped by 137% to $4.7 billion.