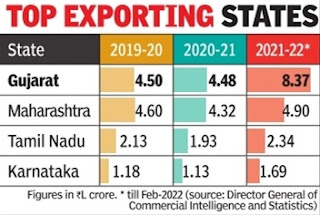 Gujarat has broken its previous records in exports. The state clocked exports of Rs 8.37 lakh crore in the financial year 2021-22 till February, while in the previous year the state’s total exports were Rs 4.48 lakh crore. Exporters say when the data for March, which to be is released soon, is taken into account, the figure might cross Rs 10 lakh crore. Earlier, Maharashtra was the highest exporter from among the states and Gujarat occupied the second position. However, since 2020-21, Gujarat has overtaken  Maharashtra. In 2020-21, Gujarat’s exports were worth Rs 4.48 lakh crore while Maharashtra’s figure was of Rs 4.31 lakh crore. In 2021-22 till February, Maharashtra’ s total exports were worth Rs 4.90 lakh crore.

According to officials of Director General of Foreign Trade, the commodities which have brought the highest foreign currencies by way of exports from Gujarat include petroleum, diamond, ceramics, cotton yarn, vegetable fats, textiles, oil seeds, machinery, engineering products and brass parts. “We started getting accurate statewise data from 2018-19 after implementation of GST. However, the figure for 2021-22 is the benchmark because now the GST is fully implemented and the pandemic is also over,” said a senior official.